Tuberculosis (TB) is an infectious disease that is caused
by a bacterium called Mycobacterium tuberculosis. 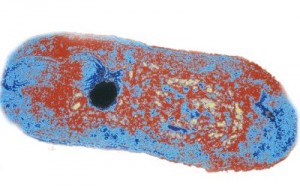 Microscopic visualisation of the bacterium that causes TB

“TB is among the top ten causes of death worldwide and the number one killer from a single infectious agent, now outranking HIV/ AIDS. Sixty per cent of cases occur in only six countries: China, India, Indonesia, Nigeria, Pakistan and South Africa.

Only 50% of those treated for multiple-drug resistant tuberculosis (MDR-TB) were cured. This could be improved through better detection, prevention and cures. The WHO’s goal is to reduce death from TB by 90% by 2030.”

How do people get infected by tuberculosis? 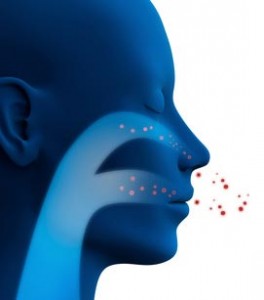 People get infected with TB through airspray

The TB bacteria are put into the air when an infected person coughs, sneezes or speaks. Dried sputum (mucus that has been coughed up or spat out) that is scuffed back up into the air can also be a source of contamination.
People nearby may breathe in the bacteria and become infected. The TB bacteria usually attack the lungs, but can also infect any part of the body such as kidney, spine and brain.

What are the symptoms?

The main symptoms of active TB disease are:

What are the treatments available to-date?

There are more than 20 drugs available for tuberculosis (TB) treatment. They are used in different
combinations according to the circumstances. More than 90% of people that do not have a drug-resistant TB can be cured in six months. (Source: www.tbfacts.org)

As of 2013, 3.7% of new tuberculosis cases have MDR-TB. It is defined as TB that is resistant to at least 2 of the most powerful first-line treatment anti-TB drugs (isoniazid and rifampicin).  Drug resistance occurs primarily because of improper treatment of standard TB, but resistant strains are also being spread from person-to-person.
Cases of tuberculosis that are resistant to virtually all drugs currently available (XDR-TB) are increasing at an alarming rate around the world. These cases are particularly difficult and expensive to both diagnose and treat, factors that lead to a major treatment access gap.