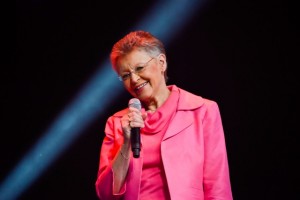 French virologist Professor Barré-Sinoussi has worked at the Institut Pasteur in Paris since 1971 and co-discovered the human immunodeficiency virus (HIV), the causative agent of AIDS in 1983. On 6 October 2008, she and Professor Luc Montagnier were awarded the Nobel Prize in Medicine or Physiology for their discovery. Amongst her other distinctions, Prof. Barré-Sinoussi is a Grand Officer of the French Legion of Honour. She received an Honorary doctorate from EPFL on 14 October 2014.

Prof. Barré-Sinoussi said: “On 15 July 2004, Nelson Mandela, who was diagnosed with early stage TB in 1988, reminded us that we cannot win the battle against AIDS if we do not also fight TB. He noted that while TB is too often a death sentence for people with AIDS, it does not have to be this way.” Prof. Barré-Sinoussi added: “I am happy to support and encourage iM4TB’s work on TB drug development and applaud their aim to stop this disease that kills three people every minute worldwide.”

Nobel laureate Barré-Sinoussi‘s support is particularly welcome as those with an HIV infection are 30 times more likely to develop TB than the rest of the population.”